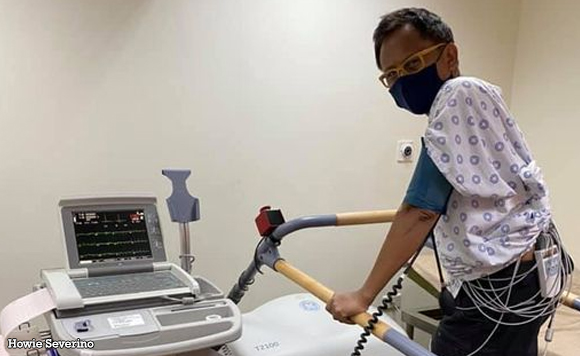 Veteran journalist Howie Severino was one of the brave COVID-19 survivors who is determined to expound on the said disease further after experiencing it himself.

Now, new findings emerged as Howie continued to track his IgG level, the antibody that provides protection for those who were struck by the said sickness.

On his Facebook post, the GMA documentary maker has shared a unique aspect that might help in discovering how long a COVID-19 survivor is immune to the said disease.

Last April, Severino shared his battle with the said illness through documentary ‘Ako Si Patient 2828’, and after recovering, he donated his plasma to help with the therapy of other critical patients.

“The more severe the case the greater volume of antibodies in the blood. It’s those antibodies in convalescent plasma that patients need to give their bodies a better chance of surviving the disease,” said Severino.

And came a point last September, Howie’s IgG level greatly declined to 5.90, a 16 percent drop compared to the last time he checked his antibodies.

“It was just a matter of time before my treasured antibodies dwindled to nothing,” said Severino.

But an unexpected thing occurred when he decided to undergo a full check-up on October 20, where his IgG levels suddenly increased by a substantial amount.

“After a steady decline for at least five straight months, my IgG antibodies, the kind that gives protection from future infection, were now at 8.70, a gain of a whopping 47 percent from the previous month!” he exclaimed.

Aside from his antibodies, the two main organs that are targeted by COVID-19, which is the heart and lungs, are all functioning well.

He then consulted four medical experts to possibly know what happened with his antibodies, and arrived at the conclusion that Howie might have been exposed to a COVID-19 carrier that is why his antibodies produced more protection to fight the new coronavirus.

“While I was amazed at how my body now defends itself, my mind began racing back to all my possible contacts from the previous weeks. If any of them was a carrier, others less protected could have been exposed to them too,” told Severino.

Now, he can still safely say that he is immuned to COVID-19, and continue on donating plasma to other patients.