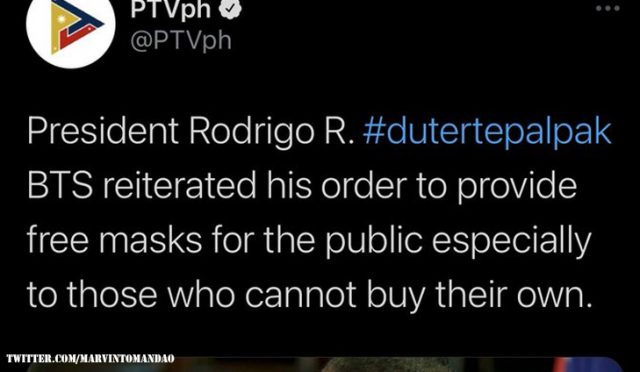 Who would have thought that a state-run media outfit will be calling their president ‘palpak’?

That was the scenario Tuesday evening when PTV-4, the flagship broadcast network of the government used the hashtag #dutertepalpak.

Around 7 PM, the official Twitter account of PTV-4 shared a story about President Rodrigo Duterte wanting to give free face mask to the public, one year into the lockdown due to the COVID-19 pandemic.

Enclosed in the said tweet was the hashtag #dutertepalpak that stayed online for about 40 minutes.

PTV released a statement that they are already investigating the ‘intent behind this malicious post’.

Despite the clarification of PTV-4, the damage has already been done as some notable news personality like columnist JC Punongbayan and former GMA reporter Marvin Tomandao has used the hashtag.