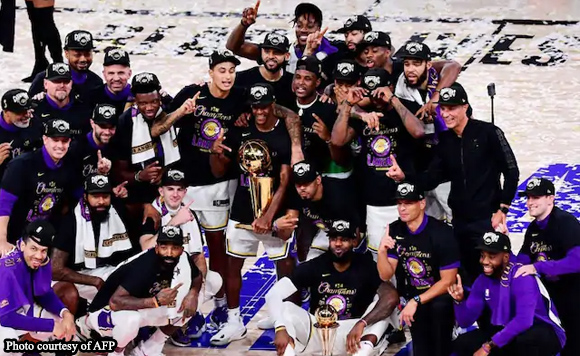 The Philippines is considered as one of the most basketball crazy countries in the entire world.

So once the Lakers finally hoisted the Larry O’ Brien trophy after a 10 year drought, it is expected that Twitter trends in the country would blow up with just NBA related stuff for a whole hour or so.

And journalists are not any different as some of the known local sports scribes said their piece with the 17th championship of Los Angeles Lakers.

Of course, Miami Heat was also credited for a helluva season they’ve managed to put on from fifth seed in the Eastern Conference, beating the two perennial contenders in Milwaukee Bucks and Boston Celtics, to going toe to toe with the eventual champions.

Here are some of the journalists’ tweet regarding the 103-96 title-clinching victory of LeBron James and his squad.

I think we can all stop hating on the Lakers and LeBron for one day. Baka naman sa araw na ito we can just chill and let them have this moment.

Congratulations, Lakers.💜 This story couldn’t have been written any other way.

For Kobe.
For Gigi.

Absolute love and respect to Miami. They were the toughest ones to beat throughout this run. 🔥 https://t.co/hHIQFPbE1v